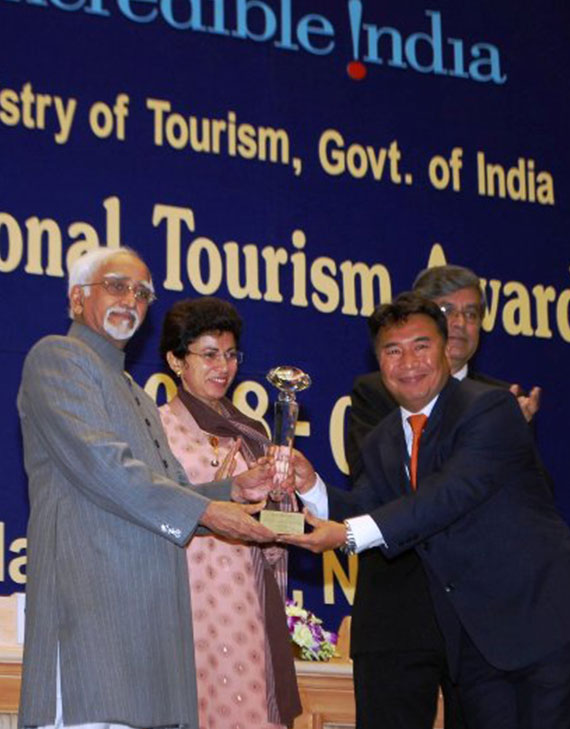 Rimo Expeditions was conferred National Tourism Award for the year 2008-2009 as "Best Adventure Tour Operator" by Ministry of Tourism, Government of India in New Delhi on 3rd March 2010. The award was given away by the Honourable Vice President of India Shri Hamid Ansari.

Sikkim Govt. appreciated contributions of Rimo Expeditions in fostering tourism in the State and also for making Jhankridhunga Rhododendron Festival a great success. 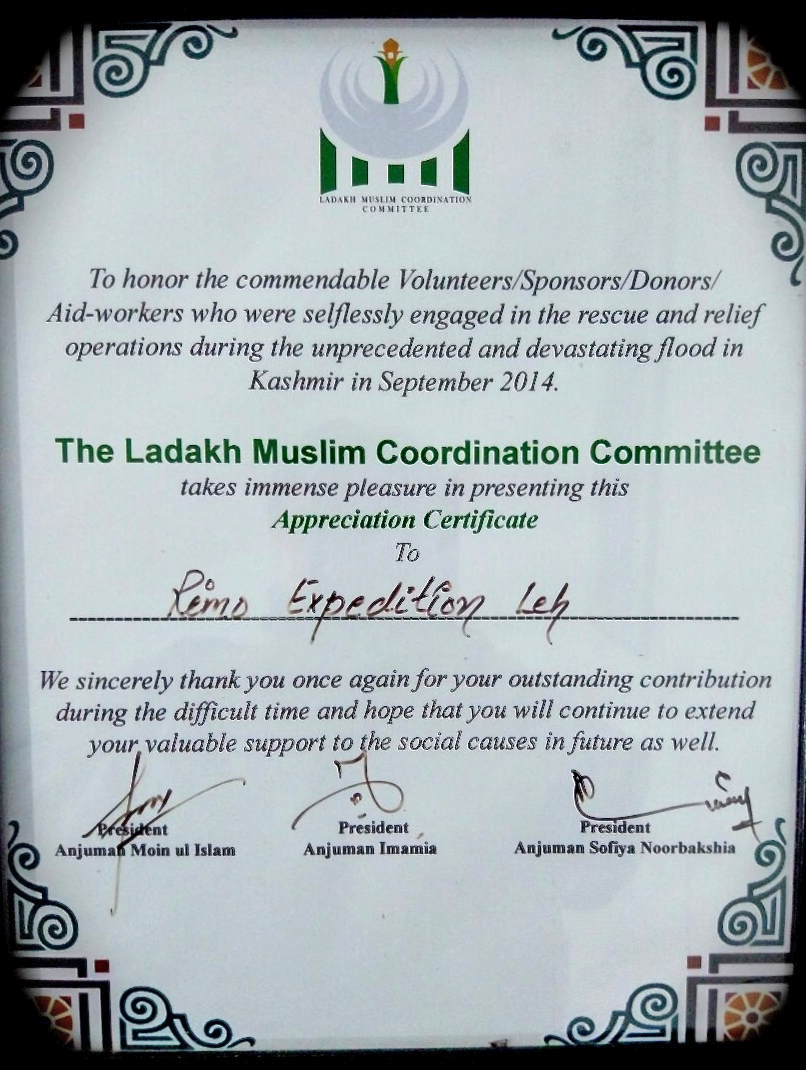 During devastating flood of September, 2014 in Jammu & Kashmir, Rimo played an active role in saving hundreds of precious lives by sending it's own team with rafts to rescue people who were trapped in their homes.

A letter of commendation was awarded to Rimo Expeditions by COAS, Nepal Army, for Joint Nepalese-Indian Army Mt. Everest Expedition. Rimo organised this Indo-Nepal Army Joint Expedition to clean up the mountain. The team brought down more than 4000 Kg of non-biodegradable waste.

Letter of Appreciation and thankfulness by French Embassy in India.
A letter of appreciation to Rimo for recovering bodies of two french tourists.

Disaster struck Leh on the night of 5th August 2010. A series of cloudbursts caused flash floods which in turn triggered mudslides in several areas causing a disaster of such magnitude that has never been witnessed in the history of Ladakh. Hundreds were left homeless and more than 300 died.

Rimo Expeditions was also involved in searching and retrieving bodies from several affected areas where backpackers were washed away in the flood after help was sought by the embassies of France, Spain, Romania and Italy.

The October 2011 edition of the Lonely Planet Magazine (India) has a 16 page spread on the Chadar trek which we operated in January the same year. The Chadar trek bags a place among the top 10 destinations in 'The Winter List'. The Chadar or the Frozen River Trek happens on the frozen Zanskar River and is an ancient Zanskari winter route.

Indian Air Force writes after their first successful ascent of Mount Everest, by female IAF officers, in Spring 2011 that was organized by Rimo Expeditions against great odds. Out of the 14 members, seven reached the summit including three women. 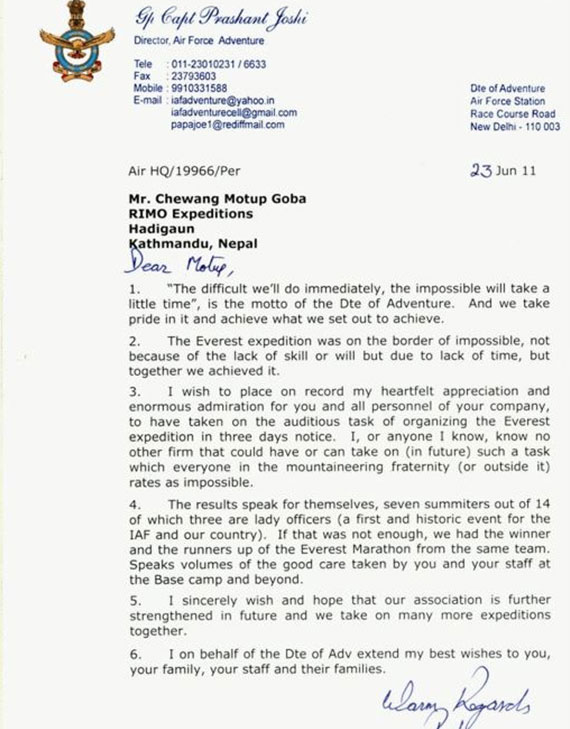 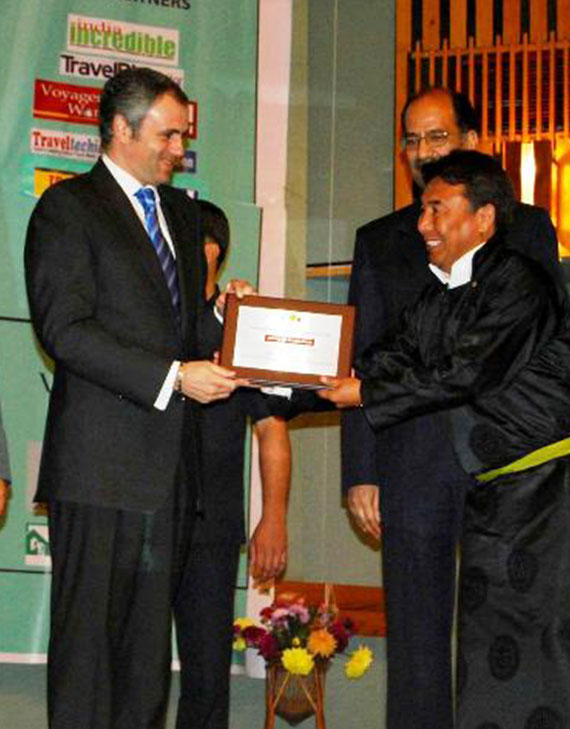 Rimo Expeditions was conferred the Award of excellence for "Best Practices in Adventure Travel" and "Award of Excellence for Capacity Building" at the Annual Convention of Adventure Tour Operators Association Of India (ATOAI), which was held from 12 - 15 September 2011 at Srinagar. The Honourable Chief Minister of J&K, Omar Abdullah, inaugurated the convention and later gave away the Awards.

Rimo Expeditions was awarded the prestigious 'Best Adventure Tour Operator' award by the Ministry of Tourism, Govt. of India in New Delhi on 28th March 2011. The award was presented by Bollywood superstar Priyanka Chopra in the presence of the Honourable Lok Sabha speaker Smt. Meira Kumar and Minister for Tourism Shri Subodh Kant Sahai. 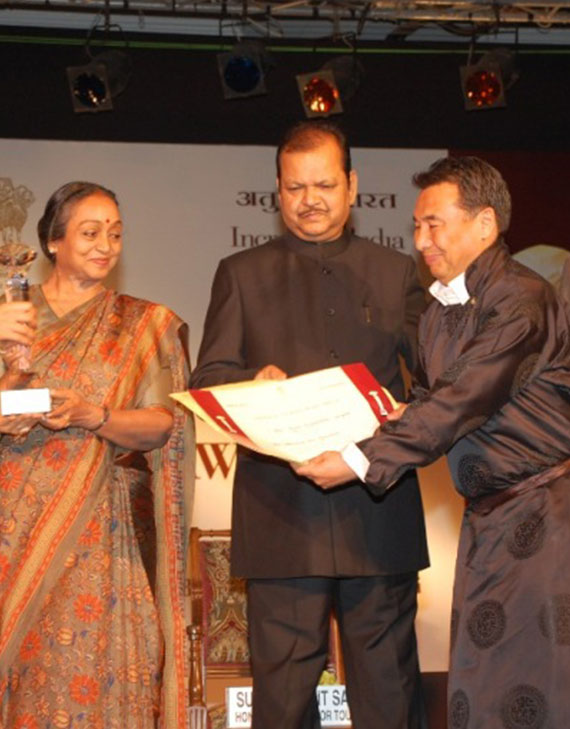