Sustainable and Responsible Travel is what we believe in and all our efforts are put into practicing this at our end. We respect the places we visit, the locals and their culture and our travelers’ experience is enhanced with meaningful interactions with local people and a greater understanding of the local culture, social and environmental issues.

Love and respect for all places we visit is of prime importance. To leave any place we visit unharmed and unspoilt, so that it remains as beautiful for future generations to come. We inculcate this value in our employees and encourage the same in our clients. We also try our best at giving something back to all the places we travel. The following are a few of our initiatives

The best thing we at Rimo do is to provide employment to the locals by using them as your crew on our treks. Most of our field Staff is from the mountains – the Himalaya. They come from Ladakh, Garhwal & Kumaon, Northeast (Darjeeling, Sikkim, Manipur), Nepal and other places. This has made Rimo a salad bowl of many races of people in the Himalaya. They look different, speak different languages and have different cultural backgrounds. Despite the differences, once in the outdoors everything melts away and what remains is just the spirit for adventure. The camaraderie between them during our treks is commendable.

Self Advancement of Staff

Apart from giving jobs to locals we also help them in advancing in their chosen careers. Whether they are cooks, sherpas or guides we help each one of them in improving on their skills so they always come out and perform better. Our cooks are constantly imparted cooking lessons to learn dishes from different cuisines and that’s the reason they whip up delights on your treks. All our sherpas who have not been so lucky to have a college education are sponsored to English Speaking Lessons so they are not at a disadvantage on the mountain with Western clients. We also send our budding stars on the mountain to mountaineering courses at premier institutes in India to polish their climbing skills. Our Guides are kept up to date with First Aid courses, foreign language learning courses, Trek etiquettes and lessons from expert tour leaders.

Ice Hockey was played in Ladakh for a long time but without proper equipment. Rimo Expeditions contacted NHLPA (National Hockey League Players Association) in Canada through some friends and brought in more than 50 pairs of donated ice skates and ice hockey equipment in the year 2003. This gave a great boost to Ice Hockey and the Ladakh Winter Sports Club under whose initiative ice hockey flourished and has now become popular among the youth. Rimo Expeditions formed its own team of stellar players six of whom were selected to represent India at the IIHF (International Ice Hockey Federation) challenge cup held in Abu Dhabi in 2009. This has encouraged and given an international exposure to the budding Ladakhi players.

The whole Himalayan stretch lacks good schools and a sound education system. Rimo is involved in many school development projects in all the regions we operate. We also help many schools in getting sponsors from abroad. Rimo contacted Juniper Trust who raised funds for building a school for monks in Kalimpong and rebuilt a school in Jorebungalow Darjeeling (Congress School) as well as putting a roof on the Markha village school in Ladakh. Through our foreign School groups visiting Ladakh we have raised funds for local schools in Leh and Shey and continue on with our endeavours to make a difference.

By arranging a partnership between the Neurology and Epilepsy Department of Cleveland Hospital, Ohio, USA and Dr. Tsering Norboo of Ladakh Institute of Prevention, Rimo Expeditions have been organizing the 'Annual Neurology Camp' in Leh since 2013. For further details and snippets of past camps, visit www.ladakhneurology.org

We are committed to protecting the fragile environment of the Himalayan mountain ranges and believe in zero impact travel. We inculcate environmental consciousness amongst our staff and encourage similar responsibility in fellow travelers.

As an active member of the All Ladakh Tour Operators Association (ALTOA), Rimo initiated and organized, together with tour operators of Ladakh, the first-ever clean up of the Markha and Stok Valley. We brought back 30 horse-loads of tins, bottles and garbage. This practice continues till date with clean-up of this very popular route at the end of the trekking season.

In Spring 2013 a joint Indo-Nepal Army clean-up expedition to Mount Everest was organized by Rimo Expeditions. Apart from climbing, the team managed a humungous clean-up of the mountain above base camp bringing down over 4 tonnes of garbage which was handed over to SPCC at Namche Bazaar.

We make sure to bring back all garbage from our treks and continue to spread awareness among locals and other operators. Our rafting division too has clean up runs on the Indus and Zanskar Rivers during the season.

Rimo has built campsites where there was a problem camping in many trekking routes where we operate. The proceeds of the camping go directly to the villagers. As part of our ongoing commitment towards the rural communities we visit, and the environment, Rimo is building twin vault composting toilets in villages with limited campsites in Ladakh and helping in creating awareness about sanitation among the locals.

Rimo Expeditions supports the International Porter Protection Group (IPPG) and as such we undertake to abide by their guidelines regarding the treatment of our camp crew and porters. On our trips that require logistic support of porters we ensure they are well equipped with proper clothing, boots and tents for shelter, besides having an insurance cover. On our post trek questionnaire we ask clients how they felt about the treatment of porters. 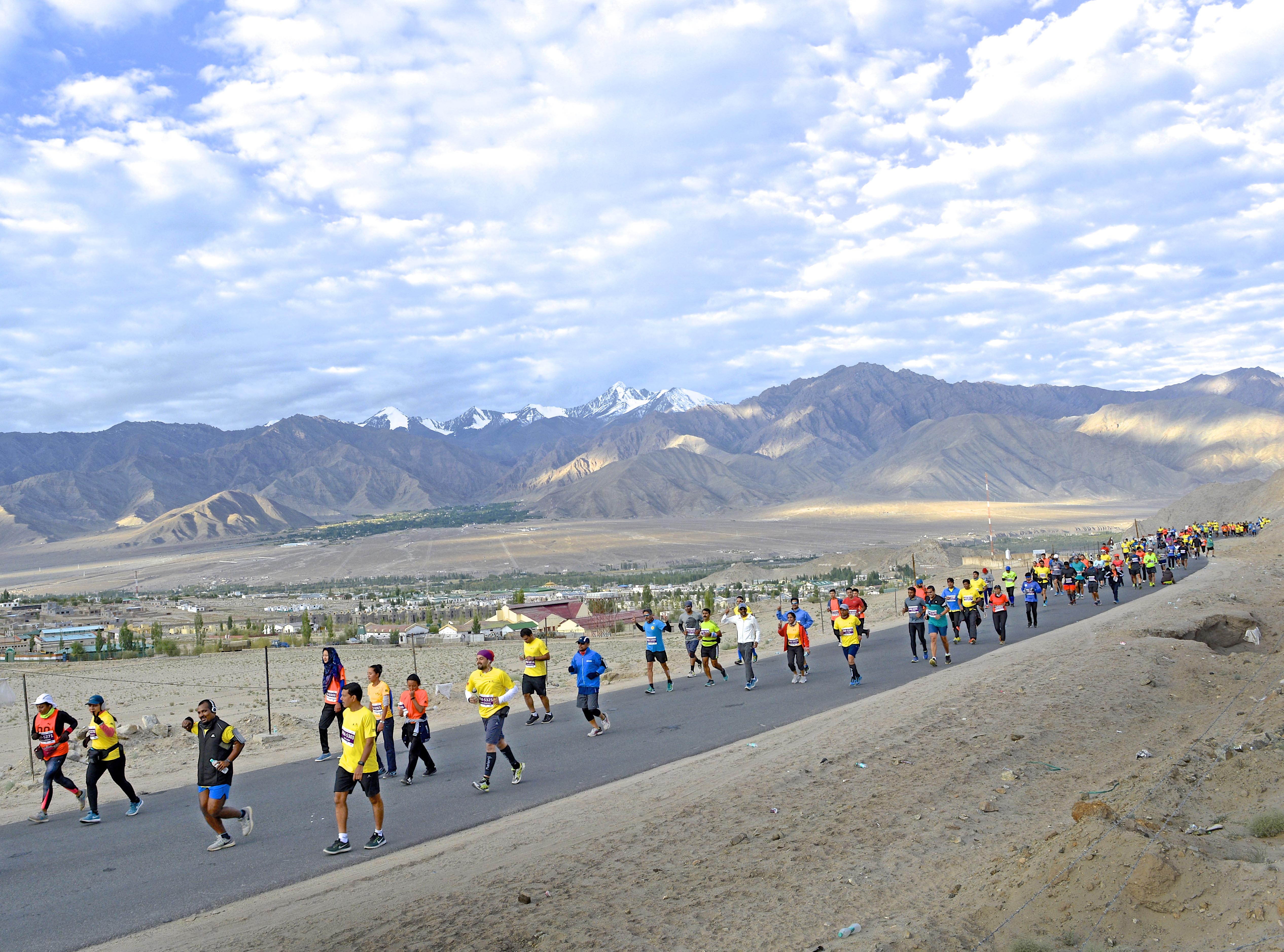 The Ladakh Marathon was founded by Chewang Motup Goba, Rimo Expeditions in the year 2012 two years after the devastating flash floods tore through the region, leaving a trail of death and destruction. The marathon was a way to say that “Ladakh is back and running”. It is the highest and amongst the toughest marathons.

The Event became a full member of AIMS (Association of International Marathons and Distance Races) in 2015, thus becoming a key stop on the global marathon calendar! Over the past 6 years it has become one of the most reputed High Altitude Marathon in the world with every edition getting bigger and better organized, with the support from the people of Ladakh.

The Ladakh Marathon remains a way to encourage the young people of Ladakh to live a healthy lifestyle by taking up running, and by becoming more aware of the need to protect a stunningly beautiful, yet environmentally fragile region.

Motup believes that Ladakh is an uncharted territory for scouting long distance runners. With the advantage of living at such high altitude, potential athletes from Ladakh have a formidable endurance. Rimo Expeditions have been supporting the runners by sponsoring their travels to Mumbai, Kolkata, Delhi for exposure to the respective marathons since 2013. Over the years, the young Ladakhi runners have been improving their performance, with two of the Women Runners having upgraded to the Elite (Indian) Category and placing 3rd and 4th in the prestigious Standard Chartered Mumbai Marathon. For further details, including pictures from past marathons and registration information, visit