Chewang Motup’s love of the mountains of Ladakh and the Himalaya is surpassed only by his drive to innovate and ensure Rimo Expeditions remains India’s leading and most trusted adventure travel company.

Back in 1985 as a 19-year-old Motup boldly piggy backed an Indian army expedition to Mt. Everest, hoping to climb the mountain behind the soldiers. He soon befriended the expedition and crossed the Khumbu ice fall 48 times while helping the expedition. The expedition, however, ended in tragedy with five deaths and Motup found himself involved in rescue operations .

There was no looking back after Everest and a year later in 1986 Motup guided the first traverse of the Siachen Glacier along the India-Pakistan border with a team of Americans and reached Indira Col & Turkestan La.

Motup has since been involved in numerous treks and expeditions including trekking peaks in Nepal, Mount McKinley in Alaska, Mt. Gya in Himachal Pradesh and an Indo-Japanese expedition that traversed the Shyok River valley in Ladakh that reached the Teram Shehr ice plateau - one of the highest and most remote plateaus in the world. He has also led trips across India, Bhutan and Tibet and was part of a select team that entered the fabled Nanda Devi Sanctuary in 2001 to evaluate its closure since 1982 for the Indian Mountaineering Foundation. During that expedition Motup reached Sunderdhunga Col, only the second time the feat had been achieved since an expedition by legendary Himalayan explorers Eric Shipton and Bill Tilman in 1934.

Trekking came naturally to Motup who was born in the Nubra Valley of Ladakh. It was a three day walk over the Khardunga La (pass) to Leh where he would catch a bus to go to school in Srinigar, Jammu and Kashmir. Motup caught the mountaineering bug at school and climbed several peaks in the Kashmir Valley including his first mountain Harmukh at age 13.

Motup’s knowledge of the Indian Himalaya and Karakoram is extensive and he is frequently consulted by leading mountaineers from around the world. He is also an experienced white-water rafting guide.

Motup’s community involvement includes his company’s support of an ice hockey team in Leh. He has been instrumental in promoting ice hockey in Ladakh as a recreational sport to pass away the long, cold winters. The sport got a huge boost when he got in touch the National Hockey League Players’ Association (NHLPA) who very generously donated over 50 pairs of Ice hockey gear to Ladakh in year 2003. These were first ever Ice Hockey gear to land in India for the local teams(Ladakh Winter Sports Club, Leh).

Motup also started the Ladakh Marathon in 2012 to tell the world that Ladakh is up and running after the devastating flashfloods of 2010. Motup believes and sees the potential of Ladakhis doing well in long distance races and to encourage the youth to take up running as a sport he has ensured that there is maximum participation of young Ladakhi runners in the Ladakh Marathon, the 6th Edition of which is being held on Sun 10th Sept 2017. The Ladakh Marathon is now an Internationally recognized marathon and become a “ must run” marathon for runners 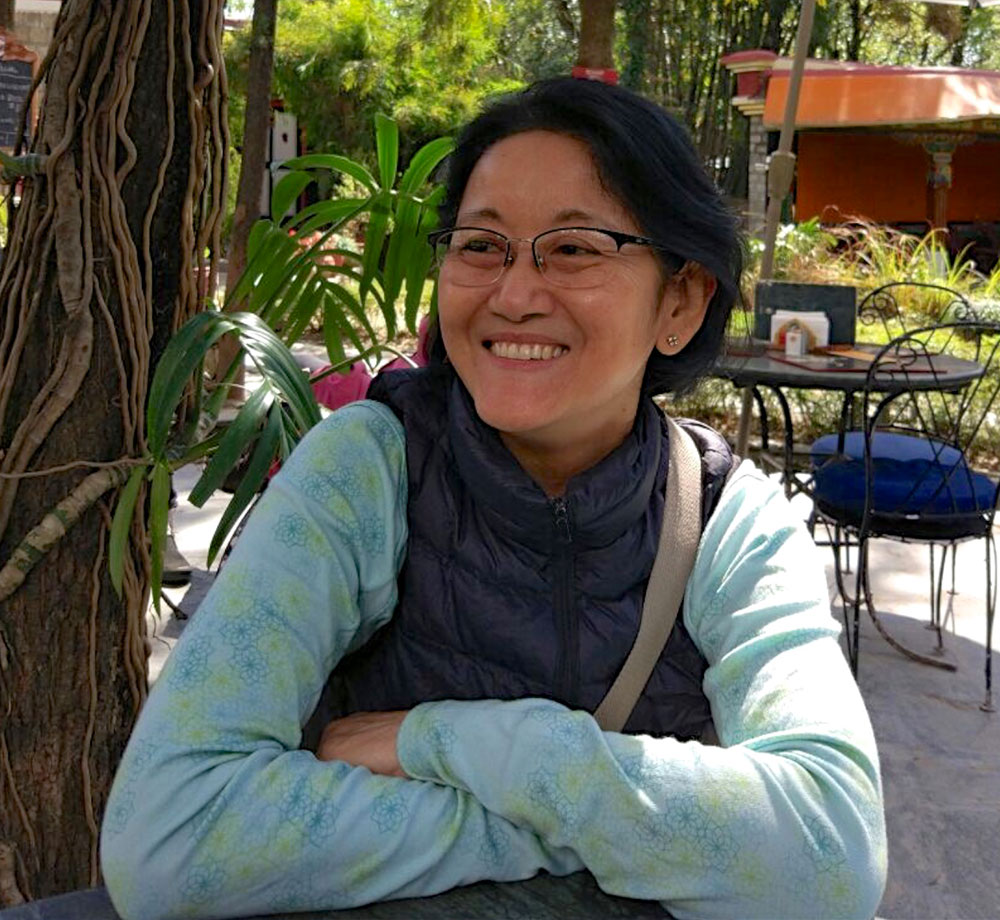 Yangdu is the linchpin of Rimo Expedition and famous for her encyclopaedic knowledge of every detail of a Rimo journey. Combined with her passion for handling complex logistical operation and multi-tasking the end result is usually a trip is as perfect as perfect can be.

Current and prospective clients from around the world routinely turn to Yangdu peppering her with endless questions about trips that she patiently and always promptly answers. She actually enjoys doing it!

Yangdu is also the one who handles staff relations and details that only Yangdu can do, such as giving the camp staff cooking lessons and advice on how best to accommodate the diverse palates and needs on each one of our treks and expeditions.

Born in Darjeeling, India, Yangdu was educated at Loreto Convent, did her B.A. (Hons.) from North Point College and comes from a mountaineering family. Her father was the late Nawang Gombu Sherpa, the first man to climb Mount Everest twice (with the Americans in 1963 and then the Indians in 1965.) He was the Director of Field Training at the Himalayan Mountaineering Institute (H.M.I.) India’s oldest and most respected climbing school. From an early age, Yangdu was surrounded by trekking and mountaineering history and her father took her on trekking and climbing trips along the Singalila range in Darjeeling and the H.M.I. base camp near Dzongri in West Sikkim. She was also an instructor for the adventure course at the H.M.I.

Yangdu has also trekked extensively in Nepal, Zanskar and Ladakh and was a trek leader in Nepal for California-based Mountain Travel*Sobek and conducted field research on children’s health in rural Nepal for the World Health Organization.

Yangdu’s other passions include a love of cooking that goes beyond the ordinary. An invite to a Yangdu dinner is coveted and not easily forgotten. 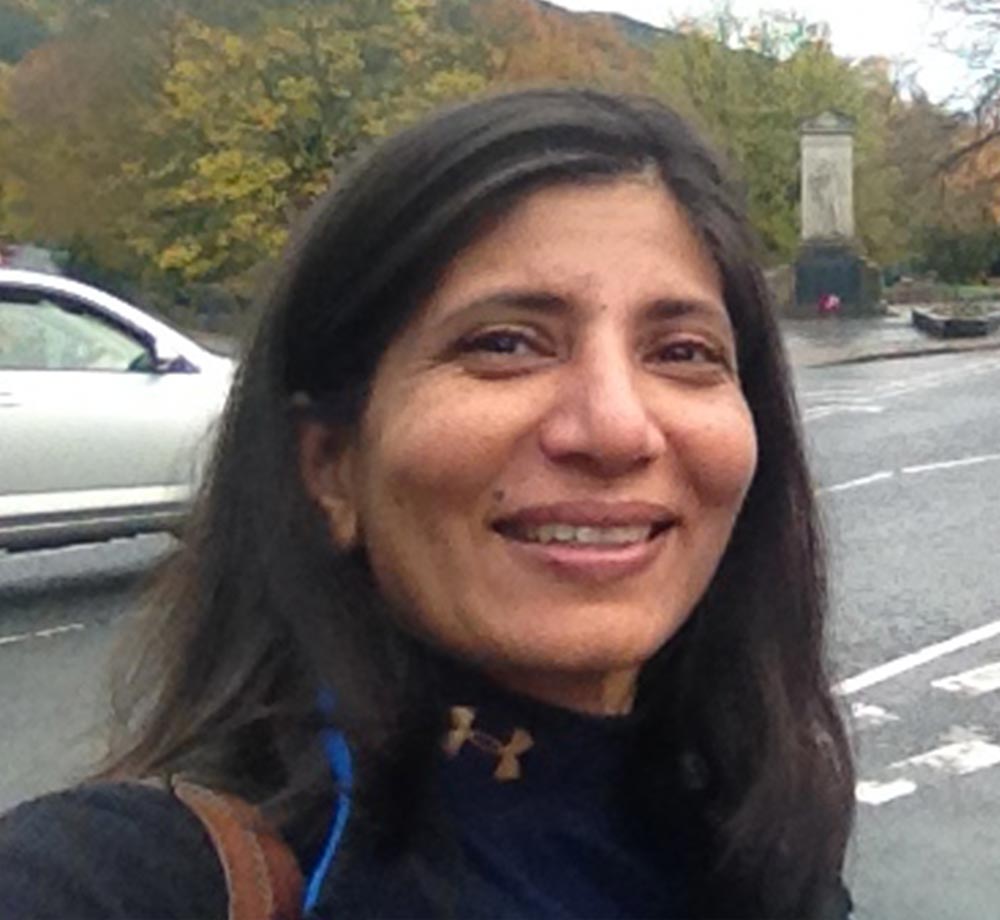 Alka is a key part of the Rimo Expeditions success story and the in-house organizational wizard. She graduated with Mathematics (Hons.) from Jesus and Mary College in New Delhi but decided to instead use her numerical skills to pursue a career in travel and tourism.

Always cool, calm and collected, Alka joined Rimo Expeditions in 1997 and has since serenely navigated her way through the Indian subcontinent’s often turbulent world of hotel reservations, airline ticketing, flight tour and other travel challenges.

She is a familiar voice and name to anyone who has booked a trip with Rimo Expeditions and developed a reputation for solving any travel challenge you may face during a trip with us or if you plan to add on a trip extension afterwards or organize a tour anywhere in India – Alka , the perfectionist that she is, is always there to give you the trip of a lifetime. 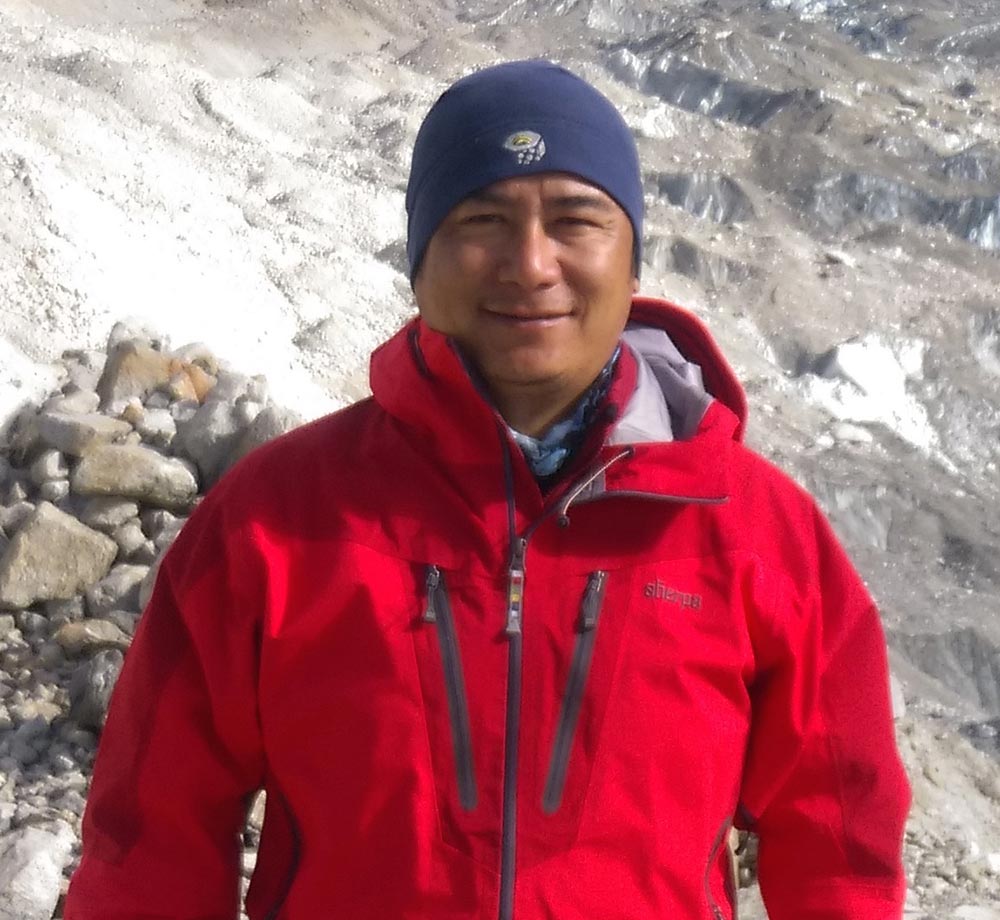 Born and brought up in Darjeeling, Uden went to the prestigious St. Joseph's School a Jesuit institution where he was introduced to the outdoors – part of their syllabus.There was no looking back. He went on to do his mountaineering courses and worked as a freelancing guide. It was during one of these trips that he met a Rimo group and decided to join the team. A very responsible and dedicated person with a pleasant temperament, Uden speaks fluent English, is knowledgeable about the local culture and environment and has been receiving rave reviews for his leadership from the groups he has been leading across Sikkim, Ladakh, Nepal, Bhutan, Garhwal, Rajasthan,South India.

Over the years and after travelling with varied groups, Uden has developed a keen interest in birdwatching. His other interest is photography – which he gets plenty to take

With his 13 years experience across India and the Himalaya, Uden is amongst our most popular guides and well regarded by the entire team. 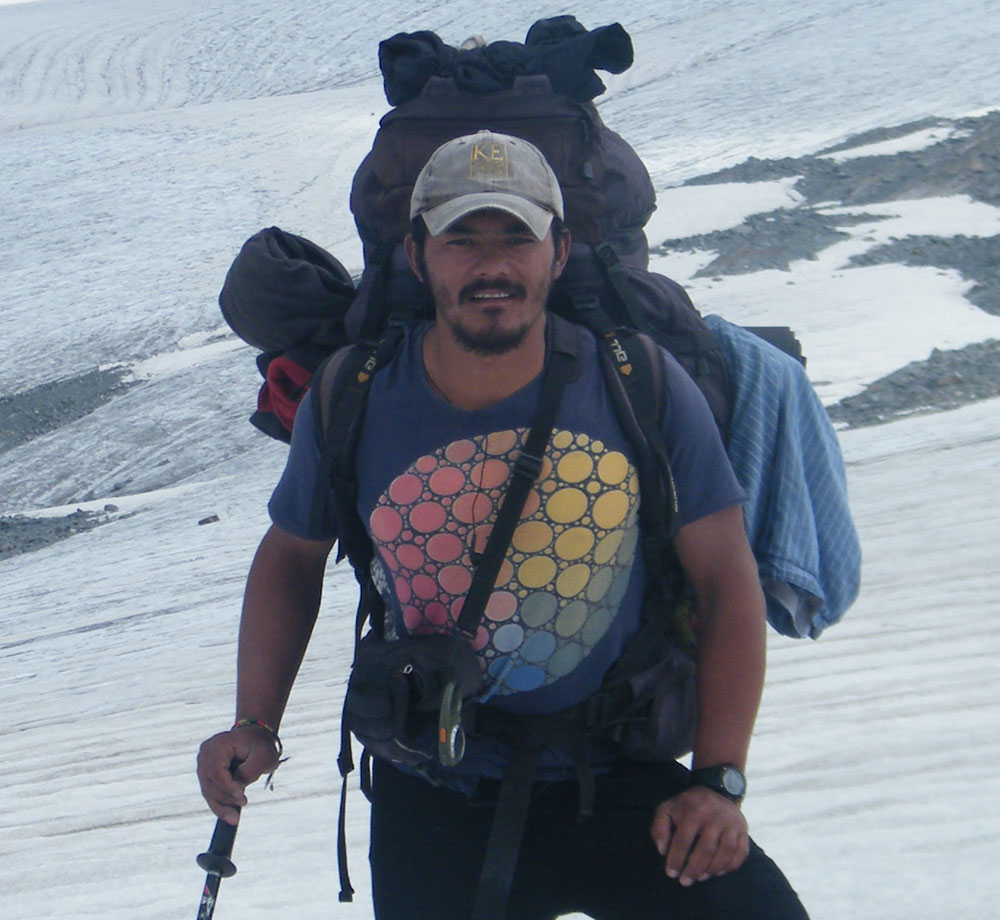 Rigzin joined Rimo as a trekking help in 1997. Born in the village of Tingmosgang in Ladakh, Rigzin with his strong determination and hard work rose quickly to become a trekking guide. He underwent English speaking lessons in Delhi and completed his basic and advance mountaineering courses and then went on to do course in Method of Instruction, Search and Rescue. Rigzin has also participated in several mountaineering expeditions in the eastern Karakorams - Arganglas with Sir Chris Bonington, Rimo IV, Padmanabh including Siachen Glacier and has proved himself to becoming a great mountaineer after having climbed extensively in Ladakh and East Karakoram. Rigzin spent 4 years at the prestigious Bryanston School in England as an outward bound instructor where he has given training and instructions on outdoor related activities to the students and organizing and supervising the DoFe Expeditions. Rigzin also worked as a fire officer while in Bryanston and completed 2 leadership courses at the prestigious Plas y brenin School in Wales, UK. Rigzin’s love for the outdoors made him do his basic and advance course in Ski ing from Gulmarg, Kashmir.

Fun loving and very straight forward Rigzin has great leadership qualities. With his vast experience Rigzin continues to be a very popular leader. 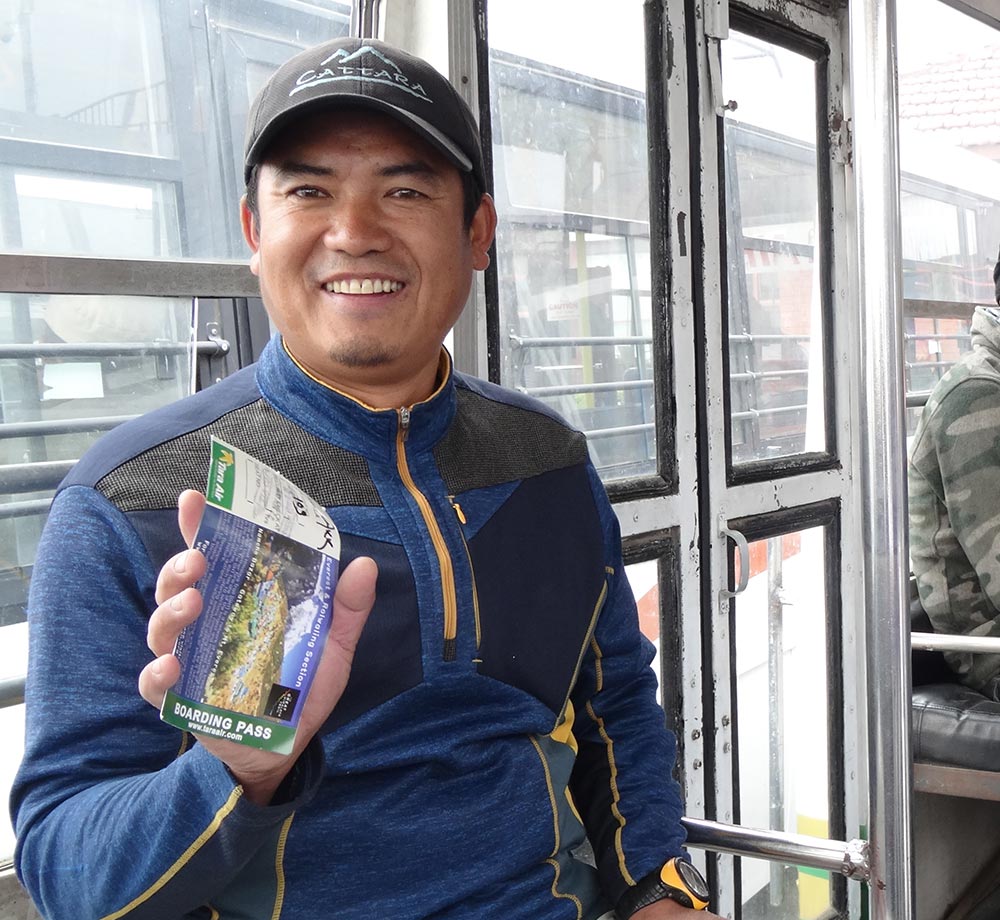 Raj has been with Rimo Expeditions since 1993 . Hailing from the Solu region of Nepal, Raj started of working as assistant cook and is now amongst our senior most cooks. A very strong and dependable person, Raj has is Sir Chris Bonnington’s man and had to accompany him on all his trips. With his vast experience of trekking and going on expeditions in Nepal, Bhutan, Sikkim, Ladakh, Garhwal, Kumaon and Himachal, Raj is a totally “ In Control” person on all his trips and has now starting guiding trips . He is looked up to by the trek crew and all clients who trek with him just love him as he is a hands on person with a Himalayan Experience of 20+ years. 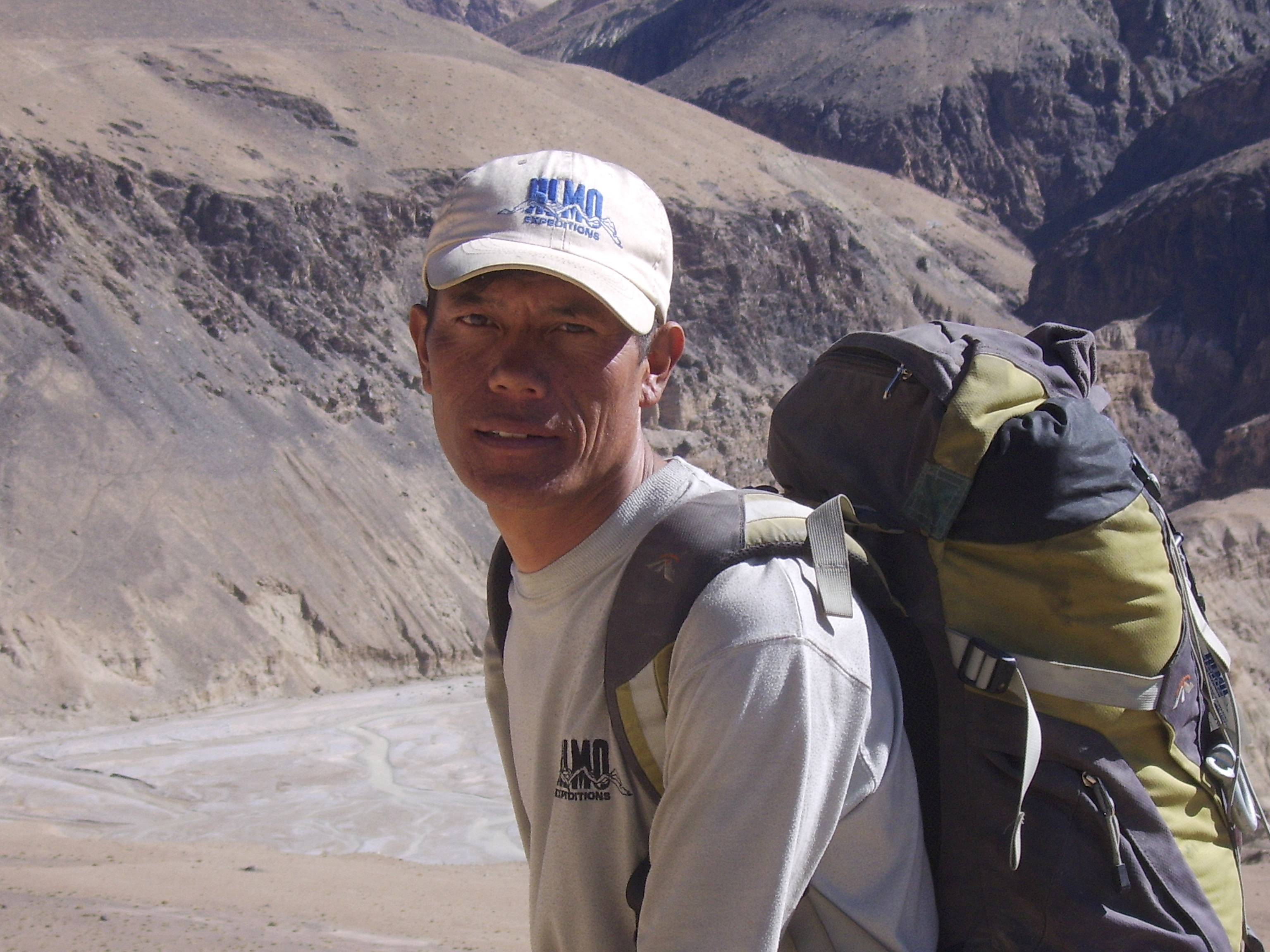 Niri has been with Rimo for the past 25 years. Starting off a kitchen help, he is now a Master Chef producing gourmet meals on treks. Kind and very hardworking, Niri is able to cater to all kinds of dietary requirements. He has trained many aspiring cooks under him and his son who joined the Rimo team several years ago has now followed his father’s footsteps and is one of our Chefs too.

From Thiksey , Nawang Tsering joined the Rimo Team 4 years ago. Nawang is an enthusiastic mountain biker and is training to become a mountain bike leader. 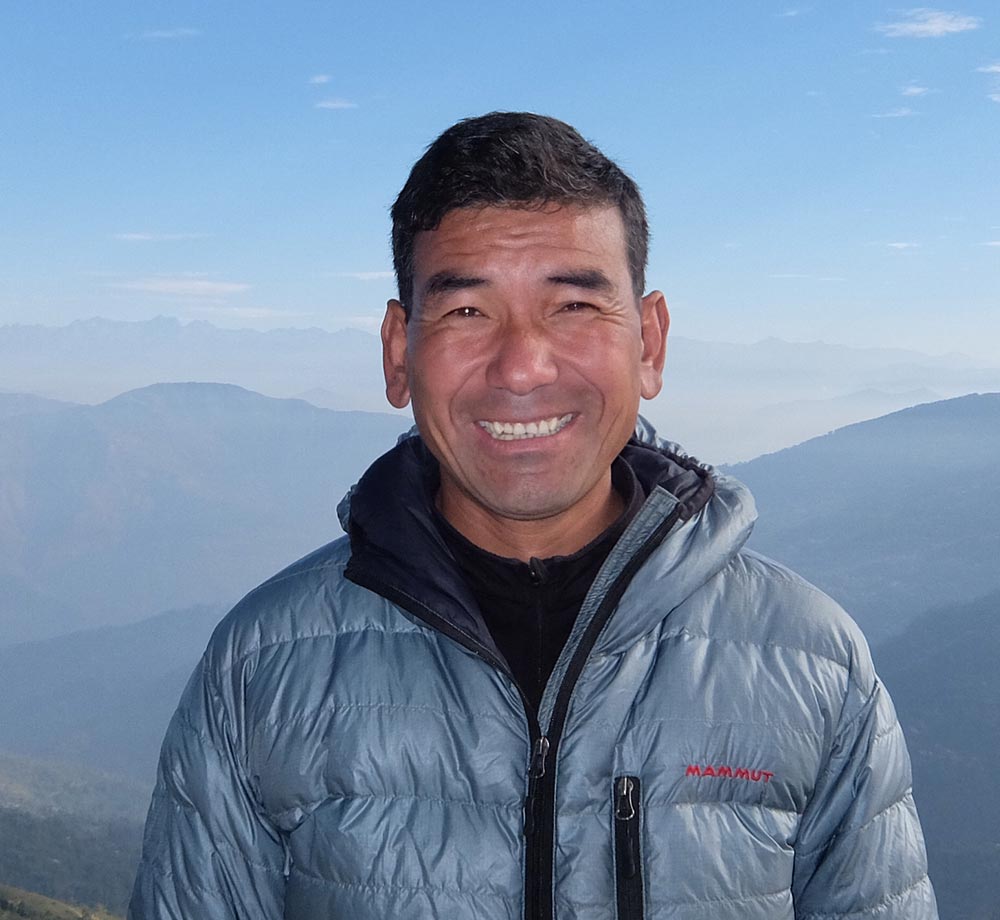 Born in a small village called Walung, in the Makalu region of Eastern Nepal, Samgyal migrated to Darjeeling as a young boy with his family looking for work. He worked as a kitchen help at the Himalayan Mountaineering Institute and then learnt the ropes of mountaineering while working. Samgyal joined Rimo 20 years ago and underwent formal mountaineering training. He gained experience climbing with European mountain guides and besides having summited Everest 3 times, Samgyal has been on several expeditions in Garhwal, East Karakoram, Ladakh and Nepal and is amongst our most experienced Climbing Guides. Soft spoken and always smiling, he is respected by everyone at Rimo and regarded highly by all our clients.